POSITIVES, NEEDS and HOPES
Balance
Squad balance and in-game balance doesn’t come quickly and we are impatient.
Have you noticed that it may well have arrived?
Amongst the litany of change on and off the field it has been lost that Arsenal have a very balanced squad, age wise.
I looked at the team today and saw experience, players in their prime and youthful energy.
This hasn’t been spotted so far but it’s there.
Fans start to lose faith when players hit 31. I don’t think we beat Utd without them though.
The players in their prime from Xhaka and Ramsey to Lacazette and Leno and not forgetting Sokratis and Kolasinac, all gave us great balance as you ideally want more players in their prime than younger or older. Big games like this allow for one youngster at a time in my opinion and Emery played AMN rather than AMN and Guendouzi.
Where you see players in their last years you also see great potential in the alternatives. Holding, Torreira and Iwobi come to mind.
There is a large group of very good youth coming through to offer balance for the future too.
As for today, Emery chose a perfectly balanced team.
In-game balance was close to perfection too.
United created some good opportunities but I didn’t feel vulnerable or lacking in attacking options either.
I didn’t see their opportunities as tactical mistakes by Emery or the team, simply quality play. At the other end we weren’t fearful to allow players to play their natural game and so Ozil started and Kolasinac and Ramsey offered threat.
Belief
I remember back in June, Gunnerblog tweeted that he had heard that the priority in the transfer market was signing ‘men.’ That is exactly what transpired. Not only did we sign men based on age but players like Torreira and Guendouzi who play without fear.
We are quick to pick on Lichsteiner but we don’t know how much of Maitland Niles’ performance today was encouraged by the man who has won 8 Scudettos.
Sokratis should be the captain and is the leader that we can go forward with.
The foundation of the team has to have a goalkeeper that the defenders believe in and Leno is proving to be that man. Not only have we beaten Tottenham, Chelsea and Manchester United at home but been thoroughly deserving of those victories too. There is a clear belief starting to emerge at the Emirates.
Better
I remember in late 2018 writing a blog and simplifying the problem with performances even though results were good. It was hard to come away from games and pick out players that were fulfilling their potential.
As fans are inherently not very patient there was a lot of worry but as we can see now if you give a good coach time and patience he can turn any situation around. We now have more than half of our lineup playing at or close to their potential and some possibly above it. Sometimes analysis is simple…. they are playing better individually.
Buzzing
You don’t need me to explain. You are too 😊
POSITIVES:
* Put simply, when Unai Emery gets his tactics right and marries that with the correct level of motivation for every game, Arsenal Football Club will have a realistic chance of winning trophies.
Today he got it right.
Players were highly motivated, always looked like they believed and he successfully nullified their biggest recent threat, Pogba, with the similar box to box enthusiasm of Ramsey.
* For the players I can’t possibly just pick out a few. All of them had either a great game or big moments. So here goes…
Leno… brave saves at pivotal times.

AMN… seems to relish big games. Do the others bore him?
Kolasinac…. Now looks like significantly more than the ‘first man to the fight.’ Adding better defensive awareness and power and timing of offensive runs.
If Monreal can do 1 more year and Kola can keep improving, I wonder if we can save £30M this coming summer and add that to what we spend on a top quality center back or winger?
Sokratis, Koscielny and Monreal… played like men. Played like they’d bet their mortgage on a clean sheet.
Xhaka… one of his best games for Arsenal.
From sacrificing his body defensively to controlling the midfield and even penetrating on the dribble, he was excellent. I’m hoping that his goal will encourage him to keep shooting. When he first came to Arsenal it was obvious that he had a fabulous left foot shot. He wasn’t the only player that seemed to be affected by the coaches desire for his players to not shoot from long range. Hoping today gives him the confidence to unleash the beast more often.

Ramsey…. it is rare for a player who should have his eyes elsewhere to give as much as Aaron Ramsey is giving. I’m so impressed with his character to ignore the future and play in the present.
Ozil… So clever at finding the right space to overload. When Auba and Laca find the right movements he will get his assists again.
Auba….. that took guts. Belief again. Impressed.
Lacazette…. good at everything. Potentially great at a few. You don’t normally get a fighter playing centre forward these days. He really cares and is deservingly a fan favorite.

Special mention for Dennis Suarez.
For the first time I started to see what he’s about. Insanely good, fast feet and potentially highly dangerous when not dribbling horizontally. When he went at the defence today he offered a glimpse.
NEEDS:
* I think Auba and Laca are top class but could be world class. In order to become world class they need to find ways to become more dangerous when we are attacking. Granted they score goals but I feel like they could score so many more if they made the right runs the right way at the right time.
* If I was the coach I would have a chat with Xhaka about shouting at the referee. He will get a reputation and get unnecessary yellow and potentially red cards for this.
* Was our defensive performance today better because the players believed more as Mustafi wasn’t in the lineup?  Not trying to be unnecessarily negative but I think it’s worth a thought.
HOPES:
* That Emery remembers the day when many thought he’d be pragmatic and he decided to be brave.
Players like a coach who is brave.
Fires them up. 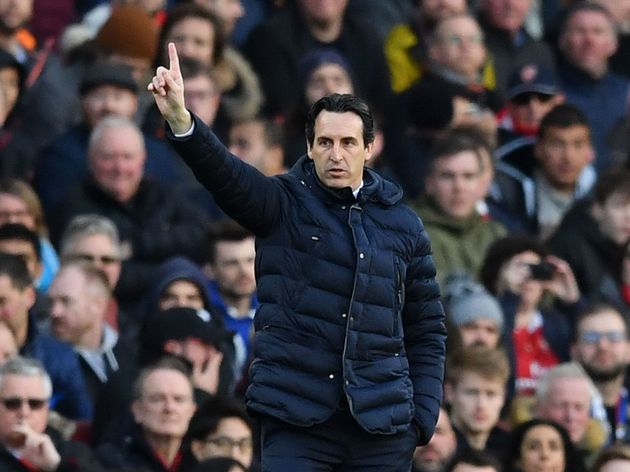 * Have you seen Xavier Amaechi play for the U-18’s?
Jeorge Bird who follows the youth set up closer than anyone feels like he is the best young player at Arsenal.
I’ve started to watch him and he looks like a very exciting dribbler. Exactly what we have lacked in certain games this year. Will he get a chance before the end of the season to prove that maybe he can be incorporated next season?
* As a Welbeck replacement for next season I’d have a look at Mitrovic at Fulham. He offers something different with his physically imposing style and ariel ability that we don’t have in the squad. Could be fairly cheap if they go down.
* Two more players to keep an eye on in the Eredivisie.
David Neres at Ajax and Steven Bergwijn at PSV.
Both have many goals and assists and are part of a group of many highly talented wingers in Europe.
FINAL THOUGHT:
The four ‘B’s’ that I spoke of today give me hope that we will turn around the Rennes game.
Can Emery keep the players motivated to play with this same attitude against the eight remaining opponents?
If he can, we will shock the league as almost nobody thought we’d get top four.
Shoutout to my 9 year old son, Maxwell. I wanted a fourth ‘B’ and he went all British on me and said, ‘buzzing.’
He feels it, I feel it and I’m thinking you do too!
@mike_mmcdonald
@GunnersTown

Back 3, Front 2, Ozil? So many decisions for Emery for visit of Man United
Approaching the Business End in the Season in Good Shape – So far and in the main so good for you?

2 Responses to ‘Balance, Belief, Better…… Buzzing!’ – What a difference 3 Days can make!