A tough game for Senor Emery today, but his unbeaten run is still intact

Even though today was Remembrance Day and the 100th anniversary of the end of WWI, this performance wasn’t one to remember.

Due to a mix of a sound Wolves game plan, poor passing from Arsenal, and attacking ineptitude, Arsenal could only scrape a draw here.

We started off pretty poorly, and Wolves were quick to exploit our defensive weaknesses.

Their boss, Nuno Espirito Santos, clearly had a detailed look at us, and how to take advantage of our still poor defensive structure.

This often manifested via long balls to our left-hand side, and Kolasinac was caught many times out of position.

Wolves opened the scoring via this route, albeit aided by a sloppy pass from Xhaka. The ball was picked up in the midfield, and Mustafi and Holding didn’t pick up runners leading to Ivan Cavaleiro scoring from close range.

Wolves had further chances in the first half, including a low save from Leno.

However, we had chances to boot, with two blocks from close range from Lacazette and Iwobi.

But the first half was edged by Wolves, largely in part due to their game plan and our weak attacking play.

Iwobi went off at half-time, and Guendouzi came on, and this helped shore up the midfield and nullify Wolves’ dominance in this area.

But then Wolves still threatened on occasion, and Leno had to make some telling saves towards the end.

Wolves are well worth their top ten placement, and Mr. Nuno is proving capable at the top division. 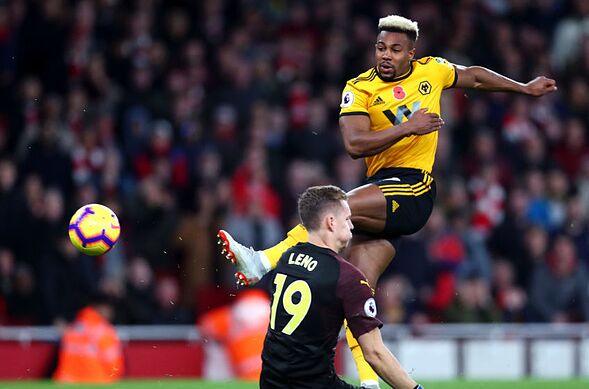 This overall was a poor performance. And a contrast to the Liverpool game. In some respects, it was like the Sporting match, but Wolves, unlike Sporting, had a go. They didn’t come to park the bus like Sporting did.

Nuno had a game plan, and it was working. Like Everton, Watford, Leicester and other supposed lower half top ten sides, we made hard work of it. Did we get lucky? Possibly. But despite them identifying our weak spots, our attacking play was poor. Auba, Lacazette, Ozil, and Iwobi were all weak, and we couldn’t retain the ball well enough. We also couldn’t get the ball passing well in midfield, with Xhaka giving the ball away much also.

I’m not really angry here since it was a draw, and we came back from a losing position to get a draw. I believe it was a fair result, and in terms of chances, it was relatively equal.

It’s worrying that our defence is still weak, but again we had the attacking guile (albeit muted for much of the game) to get a goal. Holding and Mustafi bossed Salah last week, but got caught out one on one in this game often, and needed Leno to bail them out. The stark contrast was a concern, and it’s apparent that more defensive structural work is required.

And the poor performance is a not cause for alarm since we haven’t lost, the unbeaten run continues, and under Emery, we’re in the midst of a renewal process.

This may add some pressure for the games vs. the Scum and Manchester United coming up. But then any moaning here is unwise, and we can bounce back. We have Bournemouth next, and whilst it won’t be easy, we can get a result there.

Today was weak, but the context should be pertinent here. We’re at the beginning of the process under Emery, and to be three points behind fourth, have not lost a league game since August, and have seen some tangible enhancements on the pitch and off it, then excessive moaning for me is unwarranted.

Despite the performance issues, Emery did make a positive tactical change, and this did alleviate the issues somewhat. Let’s get the win at Bournemouth, defeat the Scum twice, and end Mourinho’s United tenure. Given his side’s weak display at the Etihad, he may be a dead man walking.

The three for Kolasinac may seem harsh, but despite being a reasonable player, his positioning throughout the game was not able. This isn’t to be petty or denigrating, but a top-level defender should have the defensive awareness more so than attacking prowess. Attacking skills are a major secondary quality in modern football, and no coach or player would say a full-back alone needs good attacking qualities.

Man of the match – Bernd Leno

Was very capable throughout, and saved our bacon towards the very end. Despite a few errors, he has been very consistent since replacing Cech. And without any hyperbole, he could be potentially Manuel Neuer’s replacement in the German team. And who knows – maybe he could be a contemporary Jens Lehmann (but sane and not mad….)

#DoItForDanny: how Arsenal can deal with a physical Wolves
Chaos presents opportunity; some positives to draw from the draw [ Arsenal 1 – 1 Wolves ]