I felt the urge to write about the signings The Arsenal have made that really made all Arsenal fans & the media sit up and take notice. The big signings that had that wow factor.

There were some before my time such as Charlie Buchan, David Jack, Alex James and Bryn Jones. Also George Eastham, who although I saw play, was too young to remember him signing for us. There are also a couple of recent ones such as Özil and Alexis which are still fresh in everybody’s memory. So I’ve decided to take you back in time to the six that I thought were real wow signings.

The new Georgie Best could not oust Georgie Armstrong

The first one I remember was Peter Marinello who signed on the 6th of January 1970 from Hibernian in a blaze of publicity, dubbed by the press as the Scottish George Best. He was also Arsenal’s first £100,000 player. Marinello got off to a dream start scoring on his debut against Man Utd at Old Trafford. But from then it all went wrong for him.

He not only had the long hair and pop star looks of Bestie but he also drank and loved a bird like Bestie. He also started appearing in adverts, fashion shoots and Top of the Pops and was being distracted from his football by the bright lights of London. Peter was also in competition for a place in the side with an Arsenal legend Geordie Armstrong and Geordie saw him off comfortably, just as he did Jimmy Robertson before him. Other than his debut goal my main memory of Peter Marinello was watching from the North Bank at an electric Highbury and him missing a great chance in a one-on-one with the Ajax keeper in the European Cup in 1972.

Although he was a tricky pacy winger he never lived up to the fanfare that greeted his arrival from Scotland and he was sold on to Portsmouth in July 1973. He had a great chant though Na Na Na Na, Na Na Na Na heeey Marinello! (Ring any bells?)

A genuine Supertstar when signed

Bally arrived at Highbury on the 22nd of December 1971 for a British record fee of £220,000 and what a great Christmas present he was for us Gunners. This wasn’t a talented kid from Scotland with potential like Peter Marinello. This was one of the best midfielders of his generation in his prime at 26. He was a World Cup winner who was a brilliant one and two touch technician.  He played on his tip toes pinging passes around left, right and centre. It was an exciting time for me and all Gunners fans to be at Highbury for his 2nd game and home debut, ironically against his old club Everton. He walked onto the pitch surrounded by photographers with flash bulbs going off ten to the dozen, standing out with his distinctive red hair & famous white boots.

Sadly all wasn’t well in the dressing room or on the pitch. Bally rubbed the Double squad up the wrong way by deliberately leaving his wage slip out in the dressing room for all and sundry to see, which showed he was on considerably more money than the others were on. Bally also wanted the team to change the way they played, which had brought them such success. Instead of hitting the forwards early he wanted everything to go through him in midfield.

Mee signed Ball but at a cost

As the Double squad was broken up the team started to integrate the younger players and we flirted with relegation. Eventually we improved and Bally forged a great partnership with Liam Brady in midfield. As one newspaper termed it, ‘the sorcerer and his apprentice.’ I for one was very sad to see him eventually depart for £60,000 to Southampton in December 1976. I think had we won something with him he’d have been regarded a lot more highly by the Arsenal fans.

A British Record fee for a new Arsenal Manager

Supermac was another player that came for a British record fee of £333,333.34p on the 29th of July 1976. Gordon Lee the dour Newcastle manager wanted shot of the flamboyant Supermac, much to the dismay of the adoring Geordie hoards. Malcolm tells a wonderful story of how the deal to take him to The Arsenal was struck. Supermac, Terry Neill and Dennis Hill-Wood were sitting in Hill-Wood’s garden when Hill-Wood beckoned his butler, who walked over to them across the lawn with a telephone on a silver salver, which he then used to confirm the deal with his counterpart at Newcastle. After the call he said to Malcolm “Welcome to Arsenal Football club.”

Supermac’s debut against newly promoted Bristol City was also my debut as a season ticket holder in the East Stand Upper, having taken the plunge and leaving the terraces behind. Unfortunately it was an anti-climax as we suffered a shock 1-0 opening day defeat. But you could soon understand why Supermac was so loved up at Newcastle, as there was no finer sight then seeing the lightning quick, bow-legged Supermac racing onto an Alan Ball or Liam Brady through ball to smash it powerfully into the net. He developed a great understanding with Frank Stapleton and together they were a handful for any defence.

Sadly for Supermac and for the Arsenal we only got two full seasons out of him. In 1978-79 he struggled to play a handful of games after suffering a knee injury which was to end his career. He did return for one last hurrah in the final game of the season and typically scored in a 1-1 draw with Chelsea at Stamford Bridge. I had to run the gauntlet of leaving the ground to a hail of missiles aimed at the Arsenal supporters by Chelsea fans! Supermac ended up with an excellent scoring record of 57 goals in 108 games.

Cannonball Kid became Champagne Charlie but we loved him still

Nicknamed the Cannonball Kid after netting 50 goals in a season at Celtic, Charlie was wanted by Man Utd and Liverpool, as well as Arsenal and there was an almighty battle for his signature. To my delight he signed for The Arsenal on the 22nd of June 1983 for £800,000.

He made his debut against Luton Town at Highbury and for the only time I can remember made his entrance onto the pitch on his own, being introduced to the crowd by the announcer, after the rest of the team had already run out. The North Bank immediately idolised him as he was a real crowd pleaser with his eye catching skills. But like Peter Marinello before him he turned to the booze and birds earning the nickname in the press Champagne Charlie. Although he was a very exciting player to watch he never quite lived up to all the hype.

Won our first trophy in 8 years with 2 goals

Opposition players used to target him and he didn’t handle the physical side of the game too well. He won his only trophy with us scoring both goals in the Littlewoods Cup Final v Liverpool. But George Graham didn’t fancy him and eventually sold him, to Aberdeen in January 1988. But he’ll always be fondly remembered by me and many other Arsenal fans especially for so frequently scoring against Spurs.

I couldn’t believe it when I read we’d signed Dennis Bergkamp in the newspaper. There was no social media then. He was a world star like Eusebio or Platini or Van Basten. A player you watched in major tournaments such as the World Cup or the European Championships but never in your wildest dreams thought you’d ever see play for The Arsenal. But he duly signed in June 1995 for a fee of £7.5m smashing the club record fee and arriving in his prime at 26 years of age.

He repaid that fee many times over and unbelievably we managed to keep him at The Arsenal for 10 seasons until Highbury closed the gates for the last time in 2006. He even put up with the one year contracts which I thought were an insult to him. 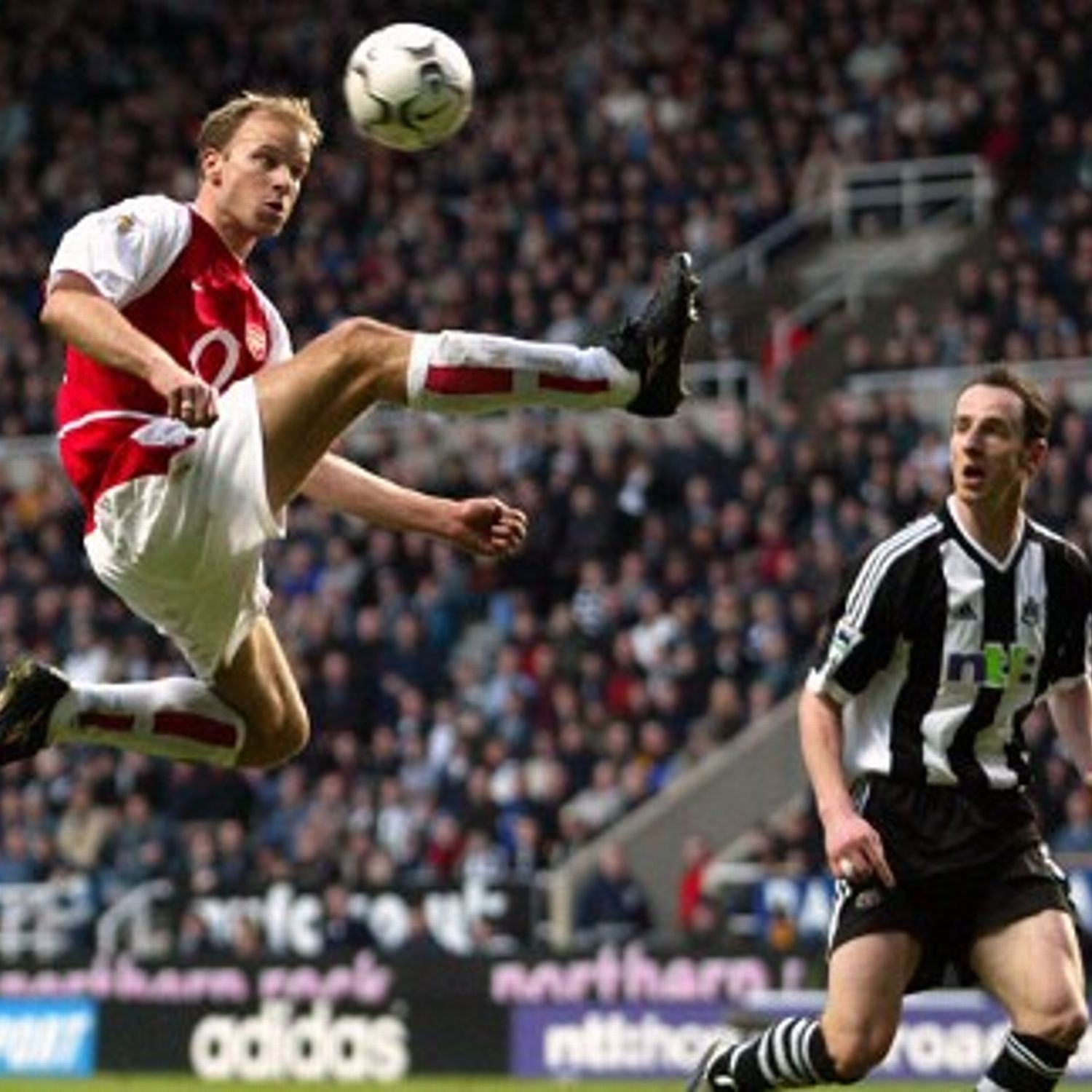 Dennis Bergkamp was technically the best player I’ve seen at Highbury in 50 years of watching Arsenal. I think most Arsenal fans would concur with that. In the words of Don Howe “Dennis Bergkamp is a Rolls-Royce of a footballer.” His mind seemed to work like a computer instantly working out the correct option to take. Some players are a step ahead of the opposition but he was thinking 4 or 5 moves ahead. He was a perfectionist who spent hours on the training pitches at London Colney honing his superb skills. A model professional & the perfect player, when I jot down my greatest ever Arsenal team from the players I’ve seen, Dennis Bergkamp is the first name on my team sheet at number 10 of course!

The final wow signing was the most shocking of them all, a truly jaw dropping moment. Not only to Arsenal fans but to Spurs supporters as well! Nobody who was at Old Trafford in 2001 for the FA Cup Semi-final against Spurs would have imagined that when Sol trudged off the pitch injured wearing the Spurs shirt that the next time he walked onto a pitch he’d be wearing the red and white of The Arsenal!

The day that Sol Campbell signed for us on 3rd of July 2001 I was sitting on my sofa when a mate sent me a text simply saying “You’ve got Sol then” I immediately turned on Sky Sports News and was absolutely gobsmacked, rubbing my eyes in disbelief. There was Sol walking along at the training ground with Arsene Wenger and David Dein! The yellow strap at the bottom of the screen read Sol Campbell signs for Arsenal. I phoned my son Neil to tell him the news and he was just as surprised and elated as I was.

It was a dagger to the heart for all Spurs fans that their best player, captain and leader had deserted them for their bitterest rivals and what’s more he didn’t cost us a penny in transfer fees. Just before the season started I was walking along outside Highbury with my son when we bumped into Garth Crooks who was wearing an Arsenal shirt with Campbell 23 on the back. He was filming a piece about Sol for Football Focus. I said to him “Good to see you’ve seen the light” he replied “shhhhush you haven’t seen nothing, the Spurs fans would kill me if they saw me filming this”

Sol Campbell has won the Double!!

Sol was a wonderful addition to a magnificent squad. A colossus at the back and a formidable opponent for any striker, so powerful and strong, he gave great presence to the defence. The backlash he got from the Spurs fans was incredible but he served us well. Although he does come across as an odd and complex character at times, saying some strange things. On the pitch however you couldn’t fault him or doubt he was one of the best defenders in the World.

These were my six wow signings. I hope you enjoyed reading about them and now like the rest of you I am waiting to see if the next ‘Wow’ signing will arrive in August 2015???

Thanks Gary Lawrence so much for sharing your amazing recollection of the day will forever be etched into the history of Arsenal Football Club.  We have been so blessed to have your memories transcribed so beautifully by you for the site. I am certain that other readers will feel that afternoon come alive as we have. If you wish to now watch the events having read Gary’s words you can do so below and ensure to follow Gary on twitter @Garythegooner56

The defensive spine Gooners pined for is finally ours.
Why Benzema is the perfect final Piece to the Arsenal Jigsaw