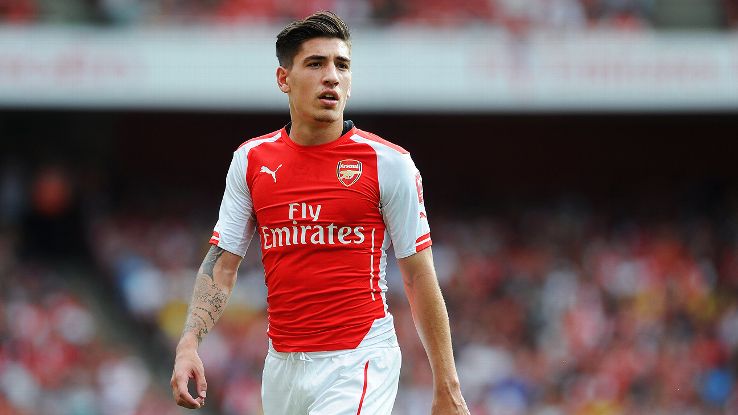 With the pre season preparations well under way and the new season approaching quickly it is a good time to assess which Arsenal youngsters could make an impact in the next year.

Last season saw the emergence of Hector Bellerin as a first team regular after fellow right back Mathieu Debuchy suffered two long-term injuries and consequently lost his place in the side. It’s not often you get a young player bursting on to the scene during a campaign but there is hope within Arsenal’s youth ranks that a number of players can become first teamers. Some will get there chance on loan but making an impact while at Arsenal will be a real bonus for the player and Arsene Wenger.

Ready to step up and challenge

The first player that has every chance to make a big impact this season is Calum Chambers. He had his ups and downs during his first campaign with Arsenal, as is expected with young inexperienced players. While he did feature a lot last season with the injuries to Koscielny and Debuchy, he didn’t appear in the team on too many occasions in the latter stages of the season.

He is still only 20 and this cautious approach in the second half was wise avoiding the risk of burnout at such a young age. 23 appearances in the Premier League is a lot for such a young player but I feel he has the ability to nail down a position instead of being utilised in a number of different positions last term. Chambers has all the physical attributes to be a top class centre half in the future, a position that I believe is his strongest. He is comfortable on the ball and is reasonably strong in the air, which will inevitably get better with more game time.

The one weakness that was heavily exposed during his spells at right back, specifically away to Swansea where Jefferson Montero gave him a torrid time, is his lack of pace. You do not need express pace playing at centre back; plenty of players have forged great careers with little speed of foot including our own Per Mertesacker.

If he works on his positioning and anticipation then he can become a first team regular over the next few seasons. He is an exciting talent and one that can be part of a successful Arsenal squad for a long time, just don’t play him at full back Arsene!

Akpom has shared time between leading the line for the U21 squad and spells on loan at Brentford, Coventry City and Nottingham Forest over the past couple of seasons. He came on as a sub against Aston Villa in February and made an immediate impact by winning a penalty in a 5-0 win.

He has grabbed his chance so far this pre season with a hat trick in Arsenal’s opener against Singapore XI. Despite the quality of the opposition it is good to see him get amongst the goals, scoring is a good habit to get into.

He will most likely get a loan move later on in the transfer window but during the first month of the season, while Alexis Sanchez is unavailable until at least early September and Welbeck sidelined, there may be an opportunity to see some first team action.

He would give a different threat than Giroud offers with his pace; no matter what age or experience pace will always frighten defenders and don’t discount the simple fact that he would be an unknown quantity. Opposition will not have seen him play very often let alone faced him.

I still believe a loan is a good move for Akpom but before then he has a chance to at least give Arsene Wenger something to think about for this season or more likely next season.

Some have called him the most talented youth player Arsenal have had since Cesc Fabregas, who burst onto the scene in 2004/2005. Big things are expected and even at 18 years old the pressure is surely weighing on his shoulders.

He has made a handful of first team appearances over the last couple of seasons showing brief glimpses of his ability. He impressed on the pre season tour in 2013 in which his vision and passing was far higher than anybody else of his age.

Unfortunately for Zelalem his position is one of the strongest and deepest currently at the club, he may find chances slim but when he does get a chance I believe he will grab it. There’s always chances to shine in the League Cup and if he can be part of a youthful team that has a good run in that competition it would do wonders for his development.

Under Arsene Wenger you can be sure that age is no barrier to first team action as long as you can show you have the quality to succeed.

Whatever happens over the course of the next season it will be a big season for these young players. They’re all around a similar age to when Jack Wilshere had his breakout season in 2010-2011 so there is a lot to be excited about.

I’m a 23 year old with a degree in journalism and I’ve been supporting Arsenal since birth (we have no choice in our family!). Writing about Arsenal is something that I always love doing, looking forward to contributing to this website with a mix of match previews, reviews and opinion.

Does Wenger secretly believe he can reunite Ozil and Benzema this window?
Mathieu Flamini is not as bad as you think – certainly not as bad as he is made out to be!