Saturday’s North London derby defeat aside, the last few weeks have been positive for the Gunners, who again look good value for a Champions League place.Victories over Stoke, Villa, Manchester City and Leicester City have enabled Arsene Wenger’s men to climb back into the top four. But the most recent 2-1 win over Leicester appears to have come at a price, with Aaron Ramsey and Alexis Sanchez both suffering injuries.

Earlier in the season news of an injury to 26-year-old Alexis, in particular, would have rocked the Emirates and would have left Gunners fans wondering who could possibly replace the Chilean’s creativity, work-rate and goals. Having scored 18 times since joining the club in the summer, it is easy to see why so much has been resting on the former Barcelona man. It is the same reason why he has been highlighted as one of the buys of the season by betting experts and pundits like those at blue sq. But it could be argued that the last few weeks have shown that Arsenal can cope without him.

Alexis has been unavailable for two of the last three Premier League games, and only came off the bench in the 3-2 win over Brighton and Hove Albion. In all of the games where Alexis has been absent, Mesut Ozil has stepped up to take responsibility. Having become something of a forgotten man at Arsenal and been forced to live in Alexis’ shadow, Ozil has shown just what he is capable of in the last few weeks. Goals against Brighton, Villa and Spurs demonstrated that he can score consistently and that he can threaten defences. Two assists against Leicester also gave an example of his creativity and quality. 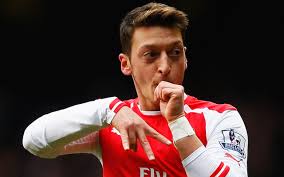 Back to his Best

It is possible that Alexis’ arrival allowed Ozil to sit back, or that it knocked his confidence and challenged his position within the squad. Either way, it is true that we have not seen the best of the German for much of this year. If Alexis’ injury does prove to be serious enough to keep him off the field for any period of time, then that will be a blow to the Gunners. But knowing that Ozil is coming back to his best and is ready to take on Alexis’ mantle will provide them with confidence that their Champions League run will remain on track. All that remains is more game time for match fitness so the German can maintain his level for the full 90 minutes. He was obviously fading in the second half versus the Foxes after 2 games in 4 days which is understandable. The 5 days between that match and the Boro cup tie will be most beneficial for him and Sunday can’t come soon enough…. For a more in depth look at Ozil’s return to form from Sideline Subz click here

Passionate 50+ ST holder who has been making the journey to N5 regularly since the early 1980s – although his first game was in 1976. Always passionate when talking about The Arsenal, Dave decided to send a guest blog to Gunnersphere in the summer of 2011 and has not stopped writing about the Gunners since. He set up up his own site 1 Nil Down 2 One Up which he has now sold and since the summer of 2013 with a friend he launched a new project to offer new and aspiring Arsenal writers a home. Gunners Town is that platform and Dave writes here too. He is also the author of 2 Arsenal related books.

The Best No. 10 On The Planet Is Nearing His Best
I want to win the FA Cup, screw 4th place – We are THE ARSENAL!