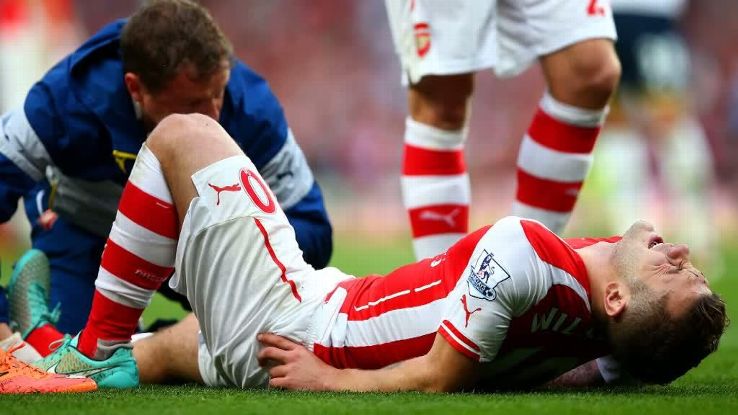 It’s often said that the Arsenal team starting the season are different to the Arsenal team finishing the season. Throughout the Premier League there’s a belief that Arsenal cannot win the title because the team only play well for one half of the season. Many feel this inconsistency occurs because Arsenal are soft and are unable to remain composed when it matters most, unlike their rivals.

The reality is – as any Arsenal fan will corroborate – it’s difficult for Arsenal to be consistent when players spend more time on the physio table than they do on the pitch. Comparing Arsenal’s injury record to other Premier League teams, it becomes clear that the frequent Arsenal complaints over injuries affecting team performance, are more than valid.

Arsenal have a truly atrocious record in comparison to other Premier League teams. Over the last 13 seasons Arsenal have had almost 100 more injuries than Manchester United – who have the second-worst record in the league – and 200-300 more injuries than title rivals Chelsea and Manchester City respectively. In 8 of the last 13 seasons, Arsenal have had the most injuries recorded, and in some cases, far more than anyone else in that calendar year.

If topping an injury league table resulted in a trophy, Arsenal’s rivals wouldn’t get a look-in.

Many people have pointed fingers at the club’s fitness staff as a result of the injuries. There has long been accusation that the departure of Gary Lewin – from the club’s medical team in August of 2008 – had resulted in the club employing sub-standard medics who were incapable of performing as well as their predecessor. As you can see above, this isn’t entirely accurate. Arsenal have had good and bad years with Gary Lewin, and the same without him. At no point did Arsenal excel medically whilst Gary Lewin was at the club, and whilst Arsenal do have more injuries since 2008, that appears to be a trend within the league, as other teams’ injury numbers increase alongside Arsenal’s – Manchester United’s figures in particular.

Looking at the above statistics, there’s no denying Arsenal’s injury record is alarming. Even more so, the fact it has taken until the summer of 2014 before the club finally started to investigate the problem and make adjustments to their medical approach.

However, even after recruiting the highly-regarded Shad Forsythe as their new Head of Athletic Performance Enhancement, and making changes to the club’s medical practices, Arsenal’s injury problems have been as prevalent as ever. We’re only seven games into the new league season and Arsenal already have 10 injured players. Even more concerning, no-one seems to know why.

One of the biggest reasons Arsenal have such a shocking injury record is because the club have been reactive to injuries. A player would get hurt, he’d get the recommended treatment, he’d recover, and then he’d go back to work. Without acknowledgement of the problem, there was no investigation into the cause of the injury. Subsequently, no adjustments were made to the behaviour that triggered the injuries in the first place, and the injuries continued to be treated rather than prevented.

It’s fair to say that Arsenal have now begun to analyse the problem and are keen to make changes to the way players are handled. With heightened focus on the situation, many of the mistakes that were made previously should be addressed, and this will bring down the numbers going forward.

However, it’s difficult to completely resolve Arsenal’s injury problems when people are looking for a singular reason as to why the injuries occur. There isn’t one change to make. There are multiple reasons for injuries occurring;

In order to dramatically lower our injury figures we need to review the problems in all areas. A number of people have looked at the above data, compared Arsenal to other teams and stated “There’s a problem here”, and that’s the discussion finished. There’s no context to the numbers quoted.

So, let’s look into that.

Arsenal’s 892 injuries in comparison to the other most frequently injured clubs.

Above we have the nature of Arsenal’s 892 injuries. Now we can actually see how Arsenal are being injured, and we can compare those injuries against the other seven clubs to see if there are any abnormalities. We can also compare the clubs to see if there’s something Arsenal are doing that’s creating more of these types of injury, or if one of the other clubs is doing something that’s preventing these types of injuries.

So, what does the table shows us?

Two things are immediately obvious. Firstly, there are 33 types of injury listed in the table above and there are 13 instances whereby Arsenal are the worst club affected by that injury type. Secondly, Arsenal are within a reasonable margin when it comes to the rare injury types, but some of Arsenal’s worst injuries are occurring at twice the rate of most of the other teams. These are the injuries that need investigating. These are the injuries that are severely harming our title chances.

Is this bad luck or bad practice?

This data spans over a thirteen season period. It’s not bad luck.

What’s causing the injuries then?

This is actually very easy to answer. If you look at the types of injuries that are most frequent, you can see the two main reasons for these injuries occurring.

1. Arsenal players are getting injured during challenges.

The number of ankle/foot injuries that occur make up 16% of Arsenal’s injuries over the last 13 seasons. Higher than any other individual injury type. Whilst the number of knee injuries make up 11% of those injuries.

Ankle, foot and knee injuries typically occur when a player is tackled. If you compare the number of injuries Arsenal have in this department, it’s around twice the number of Everton, Manchester City and Liverpool. This likely stems from the fact that Arsenal like to retain possession and hold on to the ball longer than their opponents – thus inviting more challenges when the players have the ball at their feet.

The number of hamstring injuries that occur make up 14% of Arsenal’s total injuries over the last 13 seasons, whilst thigh muscle and groin strains each make up 6% of those injuries, and calf muscle strains make up 5%.

Muscular injuries, be it a hamstring, thigh, groin or calf problem, occur when the muscle is overstretched and torn. If you compare the number of injuries Arsenal have in these areas, the figures are far higher than those of Chelsea, Manchester City and Liverpool. This likely stems from Arsenal’s poor squad rotation policy and lack of depth – both of which are forcing players to participate in more games than they should be, unlike the other clubs who either have excellent depth or rotate more frequently.

What has to change to fix this?

Very simply, the approach of Arsène Wenger. It’s all well and good recruiting more specialist staff, making sure the pitch isn’t too hard, giving the players good diets, et cetera, but these things aren’t going to radically reduce the number of injuries. It’s not as if these areas of player care have been neglected until now.

As we’ve established, there’s no amount of bad luck in the world that’s going to give you twice the number of ankle injuries that five of the most injured teams in the league get in 13 seasons. So, we have to look for a logical reason as to why this occurs; and given that Arsenal have both the highest possession numbers, and the highest ankle injury numbers, you don’t have to look far to figure it out.

The philosophy of Arsène Wenger is to retain the ball, pass the ball, and play pretty. And I appreciate that, it’s great to watch when it works. However, it doesn’t always work. When Arsenal fail to create chances after dominating games, there becomes a strong case for Arsenal to be more direct. Now there’s another reason for the team to hold on to the ball less: To help decrease the amount of injuries inflicted; because the longer the players hold on to the ball, the more they’re getting tackled – and injured. It’s that simple.

Adjusting the style of play will solve half of the problem. To solve the other half, Arsène needs to adapt to the new conditions of his job. Now he has the money to go with the platform he’s fought to create, he has got to create a more balanced team. Arsène clearly prefers to keep a tight-knit group of players, and that’s okay with lots of rotation ensuring the players are rested. But with a small squad, a lack of faith in some players, and a poor rotation policy, it’s no coincidence that 31% of Arsenal’s injuries over the last 13 seasons are muscle related.

If we look at Liverpool between 2004 and 2010 when Rafael Benítez was manager, you can see the impact his notorious rotation policy had on the club’s injury numbers. They’ve never been so low. If Arsenal were to adopt a similar rotation policy, it would begin remove a huge advantage our rivals have over us in terms of squad depth, and that would almost certainly help close the already marginal gap between ourselves, Chelsea and Manchester City.

Let’s hope the club’s investigations into the matter reach the same conclusion. Given this current Arsenal team’s exploits whilst performing handicapped, there’s no telling what these players could do if we started to introduce intelligent squad rotation and made a slight adjustment to the team’s style of play.

I’m a Gooner. What else could I say that’s more impressive than that?

The Wilshere article the Tabloids should write but can’t whilst they bash him
Arsenal’s Robert Pires, Andrey Arshavin, Mesut Ozil shows that Arsene Wenger has treated luxury players in different ways